Canada’s Career Imperative: How do we fix the “Talent Disconnect” Dilemma?

HomeCanada’s Career Imperative: How do we fix the “Talent Disconnect” Dilemma?

In 2013 CERIC began hosting a series of roundtable events across Canada to discuss fixing our “talent disconnect,” where individual skills and interests don’t always line up with emerging career options or what regional job markets immediately offer.

The goal of Canada’s Career Imperative is to have a national conversation about how to “develop, connect and retain the best of our talent” to meet the ever changing needs of disruptive markets. This is a discussion in which business, education and government all have a stake.

Recognizing the constant swings in and out of recession and major global forces that rapidly impact the changing world of work (technology, aging demographics and social behaviour to name a few), we in Canada have a real need for genuine, innovative and collaborative action.

Discussion at the roundtables focused on three key questions:

Roundtables have been held in Burlington, Toronto, Calgary, Regina, Montreal, Vancouver and Moncton. Read the reports. 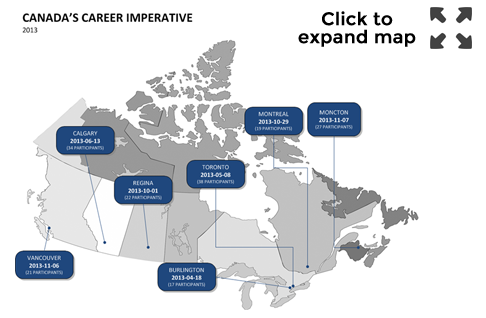 Have a look at a news report on CTV Regina about our roundtable held on October 1, 2013.

Read an article in the Times & Transcript that appeared on November 8, 2013 about our Moncton roundtable.

A special Cannexus14 Plenary Panel, January 22, 2014 brought the Canada’s Career Imperative conversation to the national stage with these high-profile panellists:

Canada’s Career Imperative is sponsored by Millier Dickinson Blais. We thank them for their support!