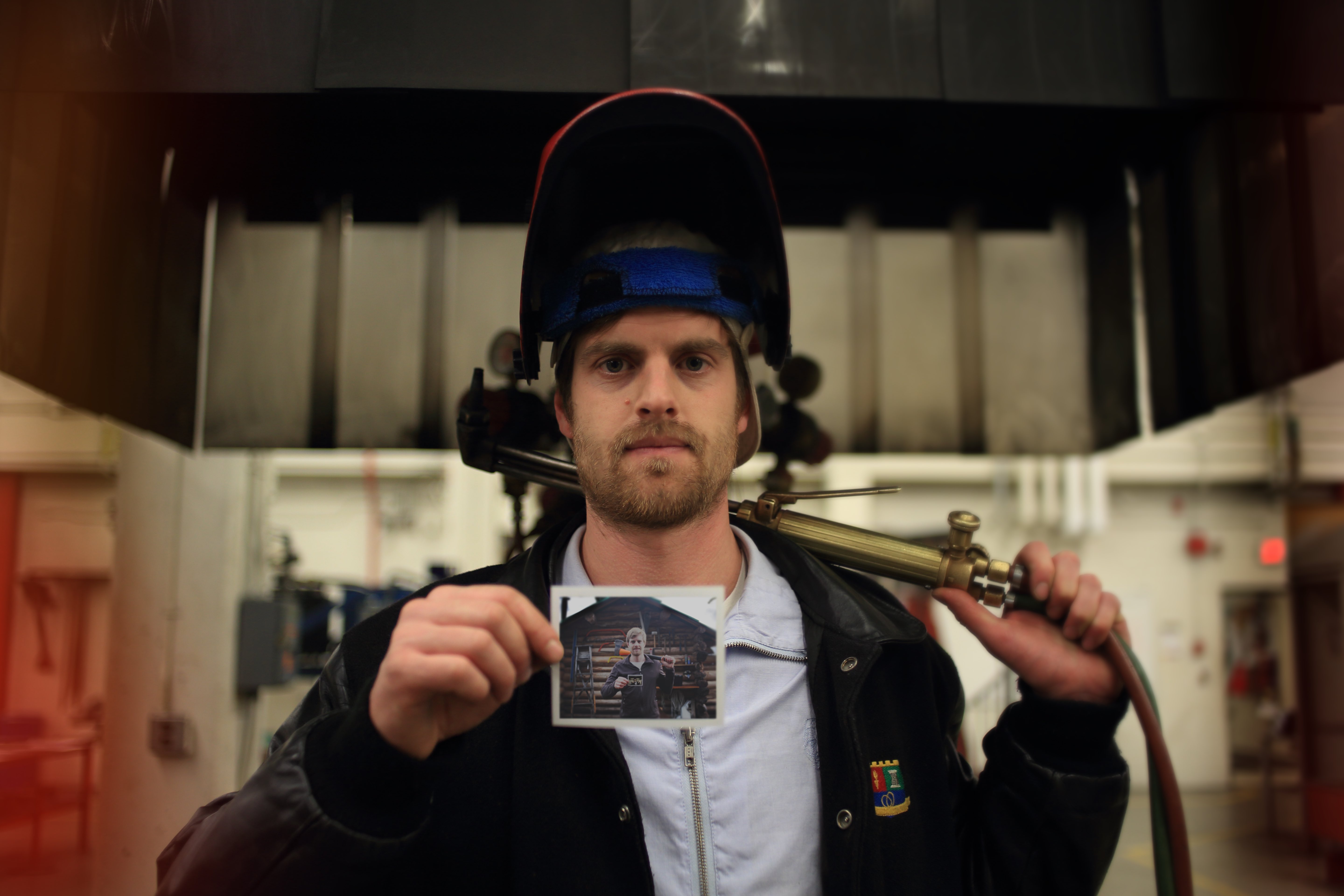 I began my career in the steel industry over a decade ago, building pressure vessels, drilling rig platforms and flare stacks for the oilsands. I was always very proud of my job and my contribution to the Canadian economy. I would often take blueprints home to study at night so I could be ready the next day to build as much infrastructure as I could. The work was exciting – lifting, cutting, bending and welding multiple tons of steel together in complex configurations. When complete, our steel creations would usually be shipped up to the oilsands to be used in oil and gas production.

During the final year of my steel fabrication apprenticeship, I was given my first project as the lead hand, overseeing the construction of a wind farm weather station. I wasn’t very familiar with wind energy at the time and, keen to prove myself, I began to research renewable energy after work to become more aware of what I was building. During my research, I came across a documentary by Al Gore called An Inconvenient Truth. The film was my first real exposure to the concept of climate change, and I developed a pit in my stomach as I watched it. All of the infrastructure I had been so enthusiastically building throughout my career was centre stage in the film as the number one contributor to this global problem.

I walked onto the shop floor the next day and looked at the production in a whole new light. On one side of the shop, my co-workers and friends were building drilling rig platforms for the oilsands. Whereas before I only saw infrastructure that would benefit the economy and Canadian way of life, I now also saw it as perpetuating climate change. What I was building on the other side of the shop, however, was going to help produce clean energy from the wind. In that moment, I realized that my skills could either be used to create infrastructure that would contribute to runaway climate change or help build a clean energy future. After I completed my apprenticeship, I clocked out for the last time and set out on a path to use my trade skills to help address climate change.

Fast-forward to 2015 and I still hadn’t found a way to put my trade skills to use in addressing climate change. In fact, I had found myself working for a number of years in the oilsands. Then, the oil price crash resulted in numerous job losses in a short time span. With thousands of layoffs occurring on a weekly basis, lunchroom conversations became planning meetings. We realized it was time to utilize our trade skills to address the growing challenge of global warming, while also diversifying our employment opportunities. So, after many meetings, in spring 2016, four of my colleagues and I launched Iron & Earth to create a better future for ourselves, our co-workers and the planet.

The overarching vision of Iron & Earth was that fossil fuel industry workers will play a leading role in building the energy infrastructure required to reach global climate targets. Therefore, our mission as an organization was to empower ourselves to build a sustainable energy economy. Our top-level goal was facilitating a prosperous transition toward global carbon neutrality by 2050. The diagram below outlines our current theory of change in relation to that vision, mission and top-level goal.

Upskilling for an effective transition

Many stakeholders are required to help ensure a prosperous transition toward net-zero emissions by 2050. This is an entirely achievable goal and it can provide prosperity to those workers who may otherwise be negatively affected by this transition, if proactive steps are taken. Iron & Earth is currently developing and deploying upskilling training programs for a number of trades and a range of renewable energy technologies. Below is a diagram outlining the transferability of fossil fuel industry skill sets to renewables.

While some skill sets are transferable with no re-training, all workers would benefit from some upskilling and education on the various sustainable energy technologies. My experience of building a wind farm weather station is a good example of this. Although I was able to figure out how to build the infrastructure on my own, it took a lot of self-guided learning and research on my own time to understand what I was building.

Based on our research and experience working in this space, most upskilling programs could be limited to five to 10 days. We see major benefits of developing and delivering upskilling programs, but very few of them are currently available. Canada is facing a major opportunity: the workforce required to transform the energy system is largely already in place and a national upskilling initiative could help rapidly re-position millions of white- and blue-collar workers.

Challenges in making the switch

One of the big challenges we have had as an organization is ensuring trainees coming out of our programs can find employment in their new industries. I know first-hand how challenging this can be. A year into my university degree in environmental studies, which I started after finishing my apprenticeship, I found myself in debt after a long period of unemployment. When I asked my union what welding jobs were available for the summer, I was told there was nothing local, but that I could make upwards of $1,000 a day working in the oilsands in Fort McMurray, AB. I couldn’t turn it down.

However, I was amazed to find that many of my co-workers felt the same way I did. They also wanted to use their skills to work on renewable energy projects and wished those opportunities existed, but those types of projects just were not happening in Canada. So, I began six years of living a double life – studying environmental issues during the school year and then working in the oilsands to pay for my environmental studies degree. Fortunately, since then, there has been a significant increase in renewable energy development. This pace of development is a great start, but still not ambitious enough to reach climate targets and ensure prosperity for workers in these emerging energy industries.

The role of career development professionals

Skilled energy workers could benefit greatly from a range of career development programs as they navigate the complexity of diversifying their careers to include renewable energy. Imagine an electrician who has worked most of his life in the oilsands. He decides to take a five-day solar upskilling program and, upon graduation, considers a number of different paths forward. Perhaps he could start his own solar installation company. Maybe he could find a job in a large solar firm. Or he could continue working primarily in the oilsands but supplement his income with jobs in solar installation if he is laid off during a boom-and-bust cycle.

Regardless of the path they take, energy workers can benefit greatly from career development support. Many of these workers do not have up-to-date resumes. Others may have not had an interview for a number of decades. Some may need support and resources in establishing their own business. Others may be overwhelmed with the number of options and need coaching to guide them to their next step.

Iron & Earth is hoping to establish a network of career development stakeholders who could help in these areas and more. We can work together to ensure a prosperous transition for fossil fuel industry workers into sustainable energy careers.