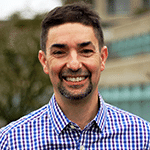 Tony Botelho is the Director of Career and Volunteer Services at Simon Fraser University, an office that was recognized with the Special Award for Innovation by a Career Centre at the 2015 TalentEgg National Campus Recruitment Excellence Awards.

In 2014, Botelho received the Rob Shea Research Award by the Canadian Association of Career Educators and Employers (CACEE) for his research on the role of career education in the contemporary university environment. And of particular pride, his grade two teacher once said he was “a pleasure to have in the class.”

In one sentence, describe why career development matters.

Career development matters because figuring out your place in this wonderfully weird and constantly changing world can be really hard – and for some it’s even harder.

Which book are you reading right now?

I am reading The Secret History of Costaguana by Juan Gabriel Vasquez. It’s a fun and uniquely Latin American response to Joseph Conrad’s Nostromo.

What did you want to be when you grew up?

When I was in kindergarten I clearly remember wanting to be a lion tamer. I think I would actually make quite a good lion tamer despite the fact that I’m not that good with animals nor am I particularly brave or daring. Actually… maybe I wouldn’t be that good.

Name one thing you wouldn’t be able to work without?

Humour, or at least my interpretation of what humour is. It makes even the most mundane activity more fun or interesting and it is an under-appreciated educational tool.

What activity do you usually turn to when procrastinating?

What song do you listen to for inspiration?

This is a tough one as I love music. But if I had to choose one song I’d go with Rufus Wainwright’s rendition of Leonard Cohen’s “Hallelujah.” Admittedly, I have no idea what the song is about but I am moved by it every time.

Which word do you overuse?

That you’re allowed to publish? Sadly I say the words, “That was a joke” or “That was meant to be a joke” far too often. This likely stems from the fact that the humour that I previously mentioned not wanting to work without is something I’m not that good at. Inspired by Jeb Bush’s now famous “Please clap” comment I’ve also incorporated a “Please laugh” line. The reactions have been similar.

I think it would be cool to be a “Careers Correspondent” on a satirical/comedy program like the Daily Show or This Hour Has 22 Minutes. The careers field needs its own Bill Nye!

Which talent or superpower would you like to have?

I’d love to be able to play any song on any instrument I came across. I hope this doesn’t sound greedy as I already play the triangle (and I’m quite good) but I feel my repertoire would be expanded by adding other instruments.

What do you consider your greatest achievement?

Another tough one. I suspect my greatest achievement is less about one thing but more to do with the relationships I’ve been able to nurture in my personal and professional life. I’ve really been quite fortunate in this regard.