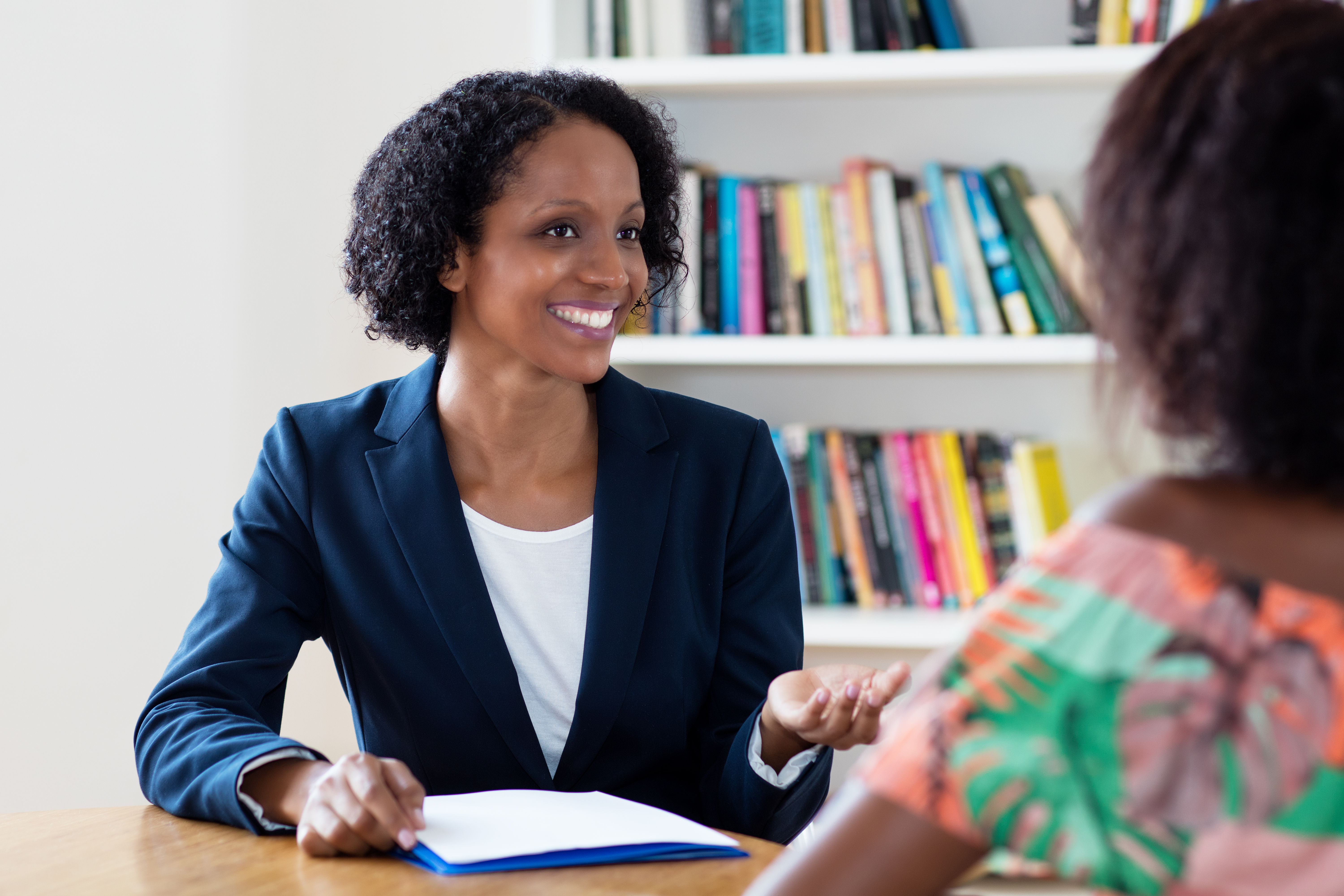 There is a pressing need for greater training of settlement counsellors – those on the front lines of welcoming newcomers to Canada – as their role changes in response to rising immigration levels and an increasingly complex settlement landscape, according to a new CERIC-funded project research report. The pan-Canadian research from two Toronto-based consultants identifies eight critical competencies that could form the basis of training to help settlement counsellors be successful as the job is redefined and the range of work is extended. While the focus is on the role of settlement counsellors, many of the insights, conclusions and recommendations can be applied to other categories of front-line settlement workers.

Canada is widely acknowledged to have one of the strongest settlement sectors in the world. At its core are 500 non-profit organizations that deliver programs and services to help newcomers adjust to life in Canada, including by improving their labour market outcomes. Front-line settlement counsellors are one of the initial points of contact for immigrants, helping them adapt and participate in Canadian society. But with the ongoing rise in immigration levels that will see more than one million newcomers welcomed between 2019 and 2021, the report highlights that settlement service agencies cannot address the challenges alone.

The report, The Competencies of Frontline Settlement Counsellors in Canada, from Iren Koltermann of eCaliber Group and Dan Scott of Calience Research and Consulting, found that the work of settlement counsellors needs to go beyond a traditional approach of providing direct services to immigrants to include building capacity in communities that welcome newcomers. The role of settlement counsellors now fundamentally has two parts, each based on capacity-building: empowering newcomers and empowering destination communities.

Direct services – historically the main purpose of the settlement sector – involve assessing the needs of newcomers and providing appropriate information, orientation, referrals and direct assistance such as helping them navigate legal services, housing, healthcare, education, employment and language training, and assisting them to appreciate Canadian society and Canadian culture.

The emerging aspect of the role of settlement counsellors is focused on building capacity in the existing community to be inclusive of newcomers. This involves advocating to overcome biases and systemic barriers that prevent immigrants from participating in society and in creating environments based on “unity in diversity.” The report makes the case that this aspect is becoming more urgent and requires greater attention.

The eight critical competencies to help settlement counsellors be successful include the ability to:

Research for the report involved conducting 40 in-depth interviews and five focus groups with settlement counsellors, managers and regional co-ordinators in Nova Scotia, Quebec, Ontario, Alberta and British Columbia about how their work is evolving and their training needs.

The counsellors interviewed had diverse educational backgrounds, most including a university degree. Only about a quarter had studied for a diploma or certificate related to the settlement sector. In the interviews, several managers indicated they prefer to hire those who have themselves immigrated to Canada, the rationale being that it is possible to train people in the knowledge of Canada but not in the experience of leaving your homeland and resettling in another country. Maximum salary levels for settlement counsellors ranged from $46,000 to $52,000 per year. Retention was identified as an obstacle given low wages generally in the sector. Additionally, most settlement counsellors were satisfied to remain in the role and did not aspire to higher positions within the field. However, those interested in career progression found that accessing the training they need for leadership positions is a barrier.

This CERIC-funded project was conceived as a contribution toward a growing body of knowledge used by settlement agencies to:

A background report released in January explored the historic and current realities in Canada’s settlement sector. The ongoing research has had two interrelated aims:

The first is to gain insight into the work of settlement counsellors and map the career path of this position. 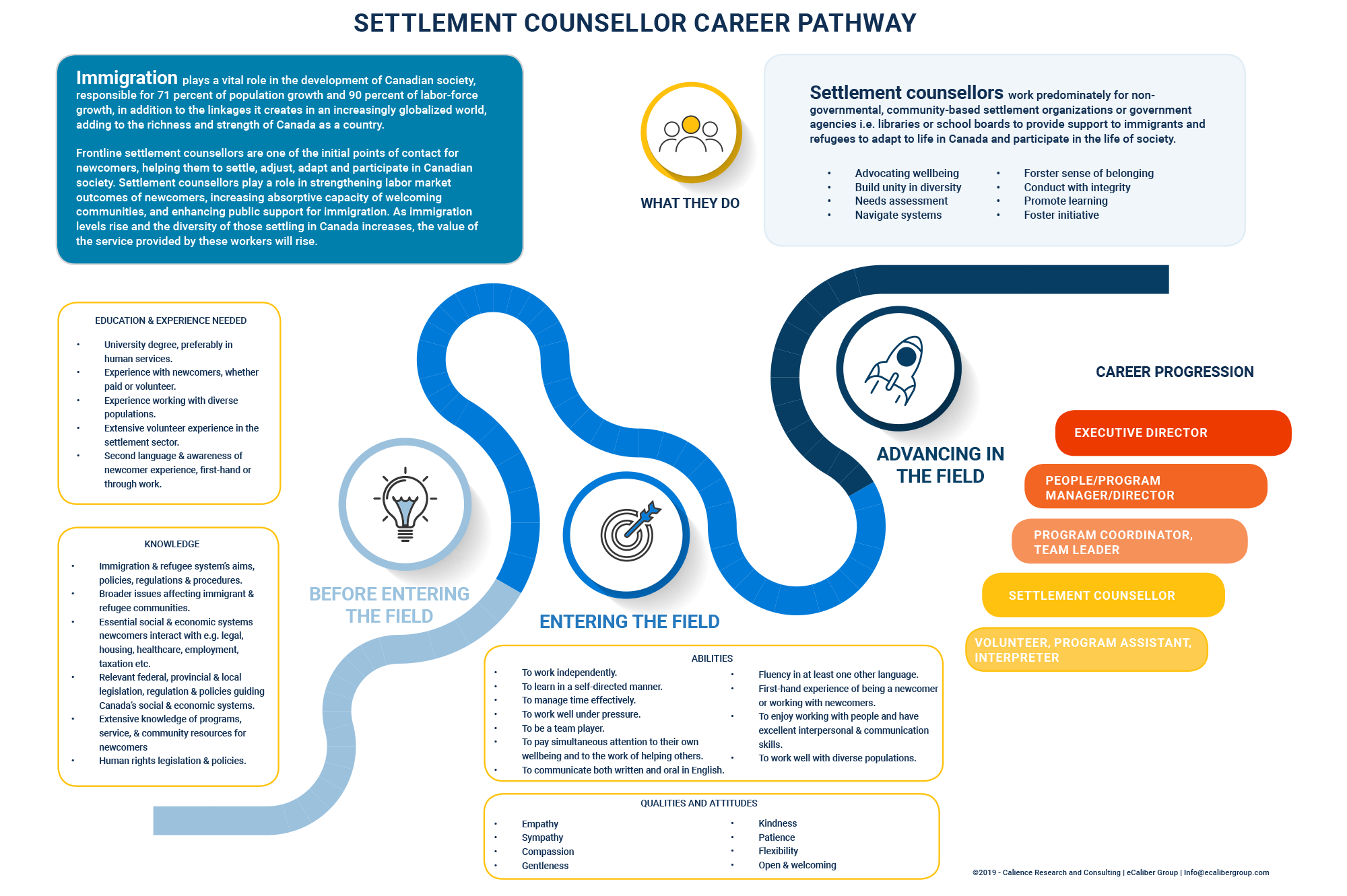 The second is to identify a competency model for settlement counsellors that can form the foundation for effective and affordable training.

Competencies of a Settlement Counsellor 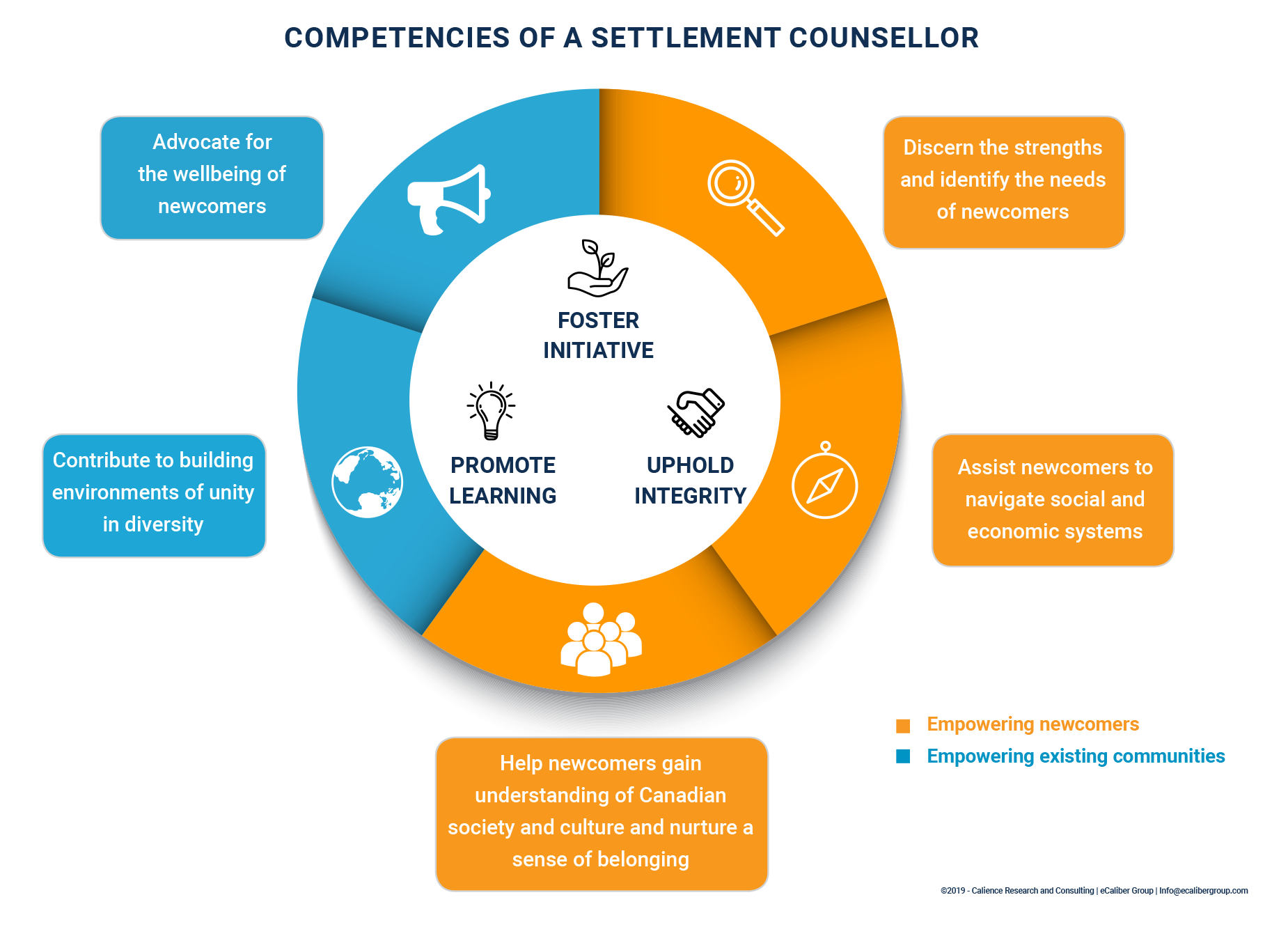 The authors of the report believe the complex challenges of settlement will require government funders, educational institutions and settlement providers themselves to support training that develops these competencies and carves out career paths in the sector. Given the critical role settlement counsellors play in improving integration for newcomers, increasing the capacity of welcoming communities and enhancing public support for immigration, the value of the services provided by these workers will only continue to rise as immigration levels grow.

Learn more about this project and access the reports at ceric.ca/settlement. Also watch for an announcement of a free webinar and roadshow that will share the report findings.